Traveling as a solo female in India was one of my larger concerns prior to leaving home. Media stories, including this piece from a few days ago, anecdotes from friends who visited India, and travel guide books contributed to my sense of caution.

With these warnings on my mind, I am making efforts to travel with other people. My first journey from Delhi to Agra was via private car with Bryana. For my second and third journeys I made friends with people from the hostel and we traveled together. Taking my first train and bus rides with other travelers helped me adjust to transit in India and decreased my sense of worry. Each journey was relatively easy, mostly on time, and comfortable.

While I feel better about using public transit on my own if needed, there are other parts of life in India as a solo foreign female that I dislike. I walk down the streets with my eyes downcast so I do not invite attention. My legs and shoulders are always covered and I often wear a scarf, even on 80 degree days. To avoid sending wrong messages, I am careful to be nice but not overly friendly with the all male, Indian hostel staff.

I am hyperaware of my surroundings. In cities I visited I see mostly men. Men operate the shops and businesses. Men drive the tuk-tuks. Younger men in groups of 5 to 10 own, manage, cook, and clean each of the hostels where I stay. Men run the restaurants as well, including doing the cooking. In line at the ATM, it is 90% men. Security lines at the airport and tourist sites have womens’ lines staffed by female employees. I have seen a few female police officers too. These sightings of women in the workplace appear to be exceptions, I imagine the majority of women are in their homes. It is startling to see this gender difference so clearly in daily life. The gender divide is also surprising given the number of female students from India who pursued MBAs at the Carlson School.

In about a week I will be in southern India. People tell me it feels quite different there. I am looking forward to experiencing the area for myself. 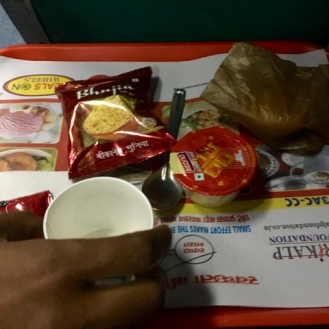 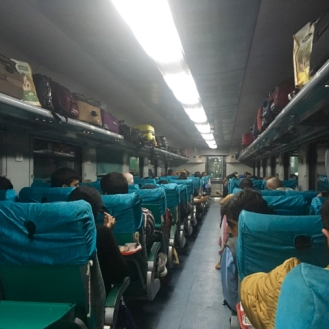 A first class train ride from Agra to Jaipur with new friend Louie from London. We were served a three course meal including hot tea and hot soup. 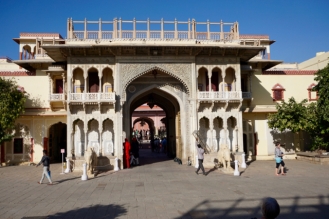 In Jaipur I visited the City Palace complex. The palace is in the center of the old city and was built in the late 1720s. Jaipur is known as The Pink City because all the buildings in the Old Town were painted pink to welcome the Prince of Wales in 1876. The pink/red/brown color remains today and must be maintained according to a city ordinance. 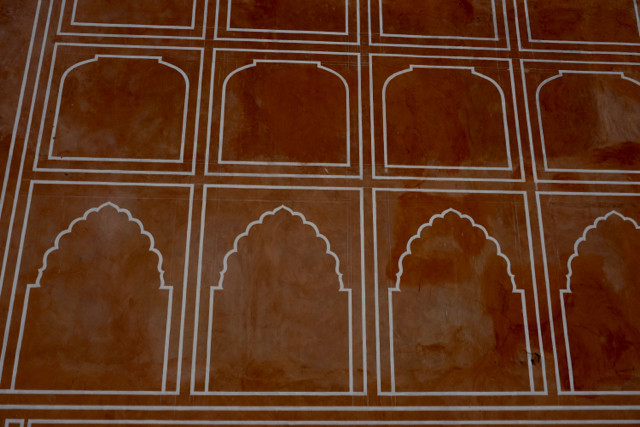 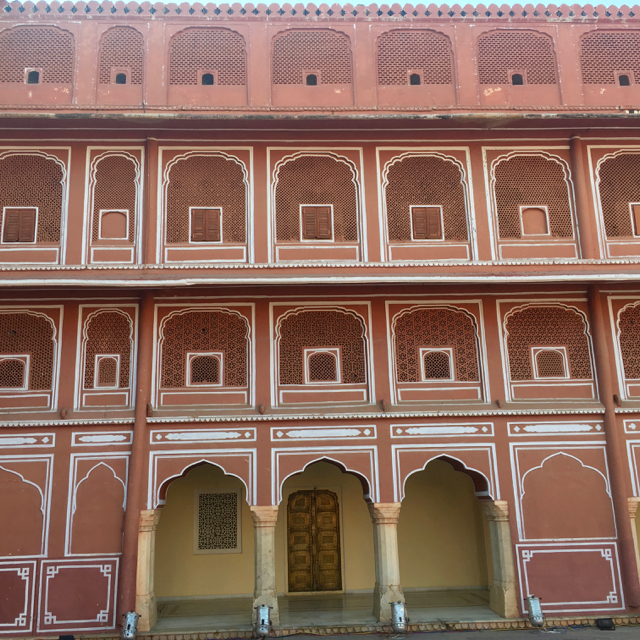 The palace architecture is a mix of European, Mughal and Indian styles. 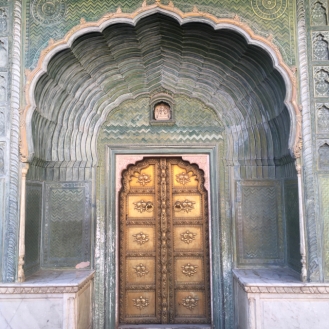 There are 4 gates leading into a palace courtyard. Each gate represents one season and is dedicated to a god or goddess. The gods represented are Vishnu, Ganesha, Devi and Shiva.

Bryana, Louie and I visited the Amber Fort. It is on a hill about 20 minutes outside of the city. For 10 rupee, or about $0.06, we traveled via city bus from the hostel to the fort. The fort is massive. Wandering the complex felt like walking in a fun maze with incredible sights and views. 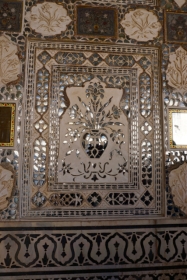 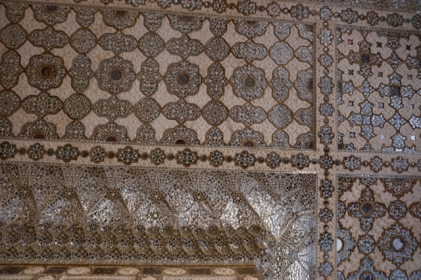 While the site is called a fort, it is really the former residence of the royal family from this region. The palace has courtyards including the Mirror Palace adorned with glass tiles on the walls and ceilings. 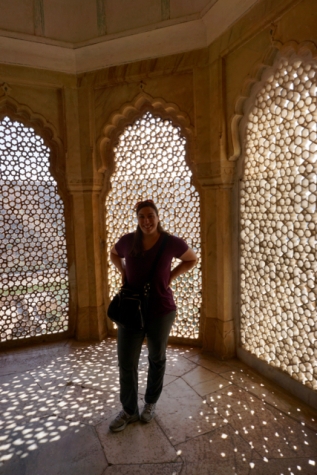 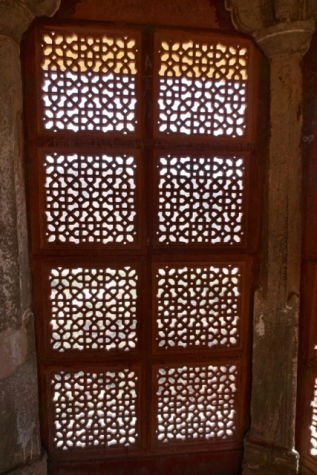 Stone screens with elaborate geometric patters are called jali and are common in Indian and Mughal architecture. Jalis lower the temperature of a space by compressing air through the holes. 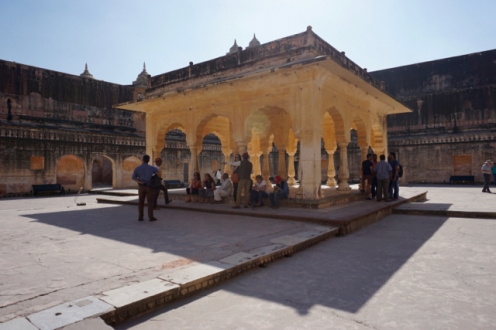 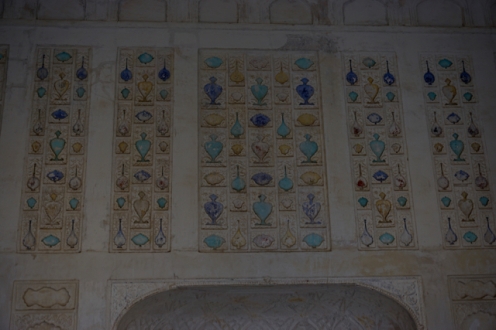 The Palace of Man Singh I took 25 years to build and was completed in 1599. It is the oldest part of the Amer Palace Fort. The walls inside are decorate with frescos.

I was in Jaipur for the U.S. holiday of Thanksgiving. I feel lucky that I met Sara and Greg (www.gregandsara.net for their Turkey day post), long term travelers from the U.S., in Agra and then we re-conneted in Jaipur. This was Sara’s first Thanksgiving away from home and she was motivated to have a traditional meal. She and Greg grocery-shopped like champions and also sourced recipes that did not require a stove and allowed for improvisation. Chloe from Napa, Sara from Milwaukee and I were the main chefs. It was awesome to be cooking again. 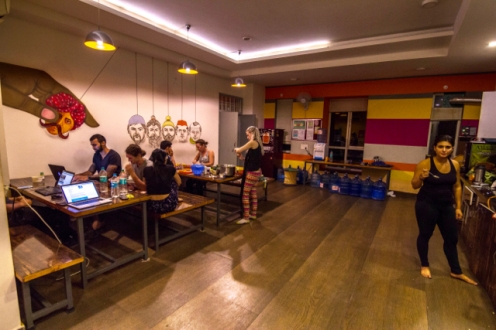 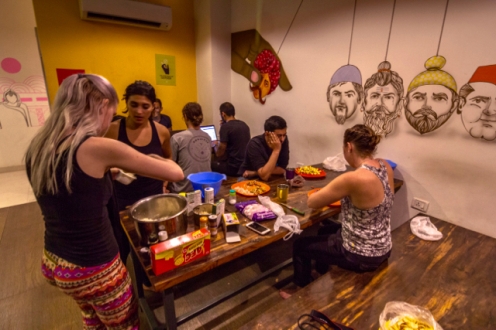 Many new friends from the hostel contributed to chopping and other aspects of meal preparation. It was a real community effort and felt great. 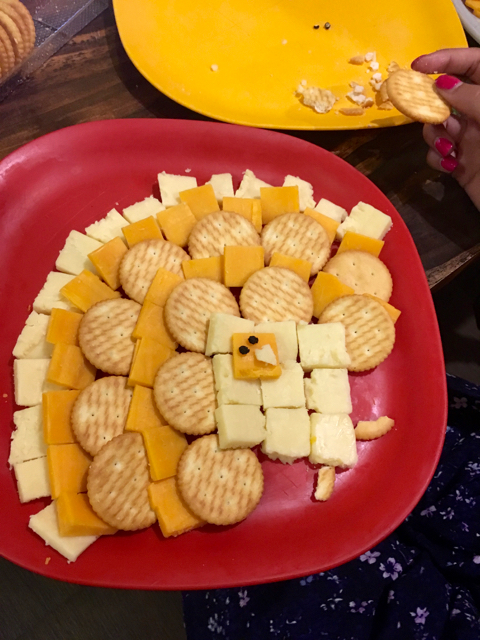 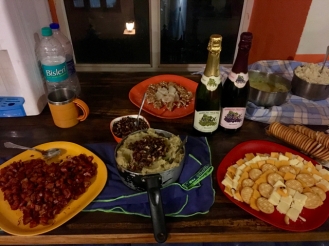 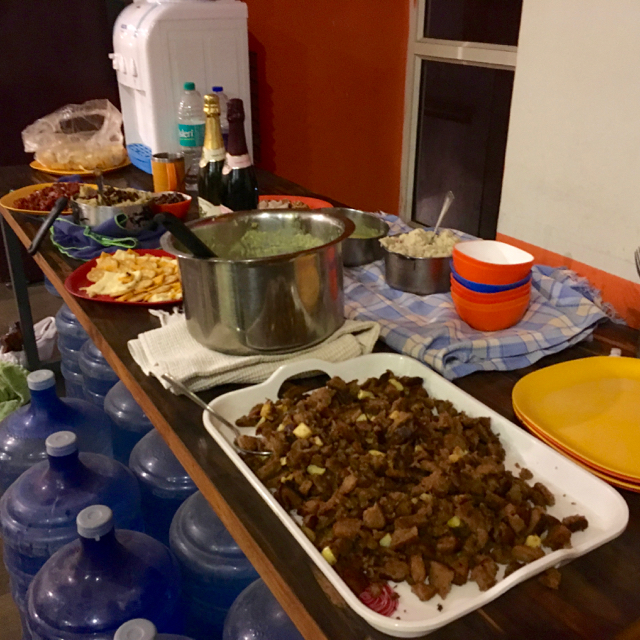 Bacon in India is quite a feat – credit goes to Sara and Greg for sourcing this ingredient for the mashed potatoes. Our final menu for this Thanksgiving meal included: stuffing, pumpkin soup, cheese and crackers, sweet potatoes with pecans, mashed potatoes, gravy, sparkling wine (India is basically dry and that is a different conversation!), sweet carrots, and marshmallow cranberry fluff.