My month of travel in Thailand included visitors from Minnesota who planned their vacations to coincide with my trip. It was a gift to spend time with close friends.

Meeting my first friend, Justin, showed me I am no longer the structured, organized, planned person who left Minnesota! We both found the following mistakes hilarious.

Oops #1
I confused Justin’s arrival date. I expected to see him at 1:00am January 10th. He arrived at 1:00am January 9. He was in Seoul, Korea when he sent me a text message update on his location. I was sitting at the spa when the message reached me. I replied thanking him for the update and said, “Fabulous, see you in 20 hours!” He was quick to respond, “Ummmm, it’s 6 hours.”

Oops #2
Because of my confusion with the arrival date, I did not book a bed for Justin’s first night in Bangkok. In emails and on my calendar I had the correct flight information including his arrival date and time. Even with accurate information, I booked his dorm bed for the wrong night.

After we exchanged texts and I learned he would be landing shortly, I called the hostel to ask about an additional bed. They were fully booked. Thanks to the kindness of the staff, they made a policy exception and booked Justin into a bed in the the staff room for one night.

Oops #3
After learning he was arriving in six hours I quickly started researching how to travel to the airport. After a few minutes of reading online, I learned Bangkok had two international airports – this information was news to me!

Before Justin left Minnesota, I sent him an email with arrival information. The message included details for an airport meeting point I had identified a few days before when I landed in Bangkok. However, this meeting point was in a different airport.

Justin, a friend who is as good at planning as I was before departing on this journey, handled the ambiguity wonderfully. For my part, I am amused to realize how easily I slipped into limited, relaxed, last-minute planning. 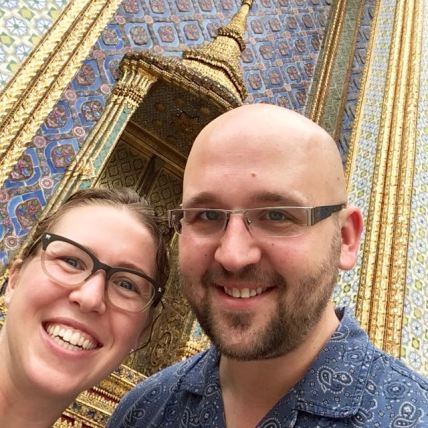 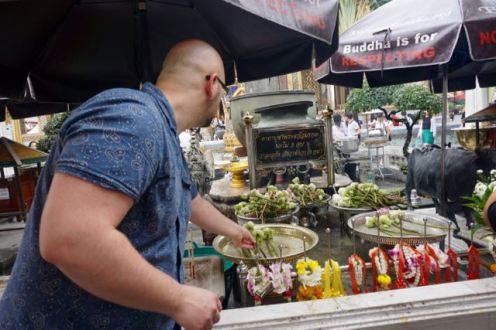 Lighting a candle and incense at Wat Phra Kaew. 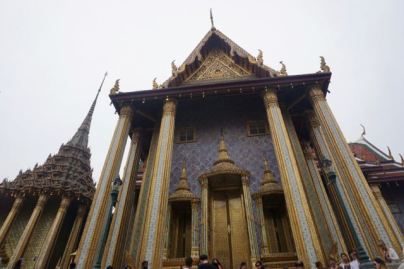 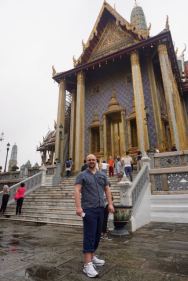 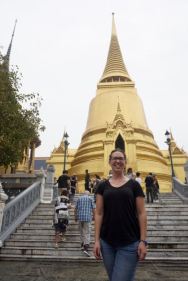 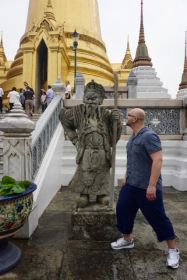 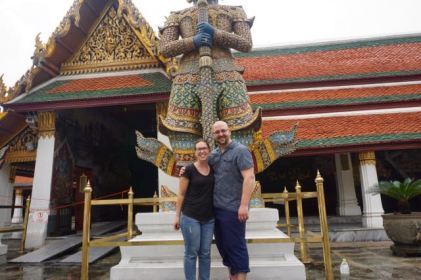 The tall gold structure is called a stupa. Relics are housed inside the stupa and the monks use the space for meditation. Out of respect for the religious nature of temples, all visitors must cover their shoulders and knees upon entering. Some temples loan visitors pants or robes to ensure compliance.

Wat Phra Kaew is on the grounds of the Grand Palace, the official residence of Thailand’s kings. Currently, the late King is laying in state in his palace. Every day thousands of Thai people dressed in their best mourning clothes wait in long lines to pay their respects. It was striking to see the people attired in black and the city adorned wth banners, signs, flowers and posters honoring their King.

We visited Wat Pho, or ‘Temple of the Reclining Buddha,’ on the same day we visited the Grand Palace. The reclining Buddha at this temple is 15 meters high and 46 meters long. It was massive. 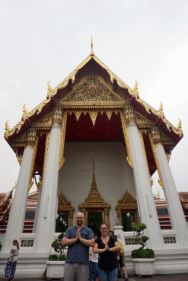 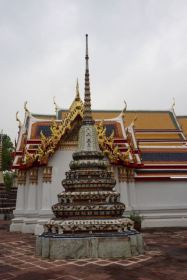 These symmetrical structures in the Wat Pho complex were my favorite sight. They are called chedis and more than 90 are on the temple grounds. 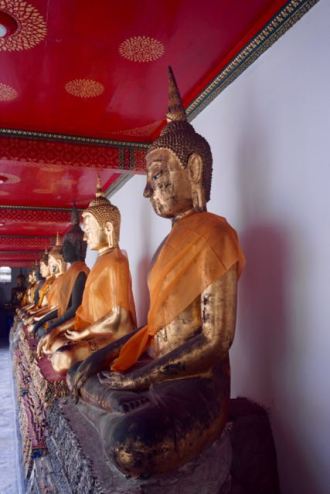 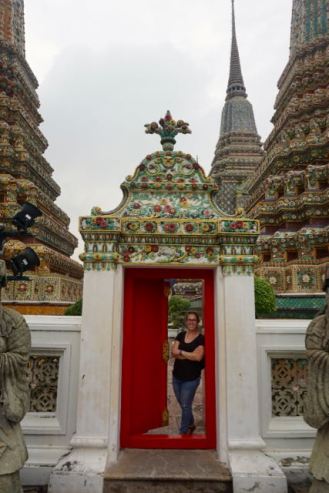 Buddha statues at Wat Pho and Chinese guards at the gate. 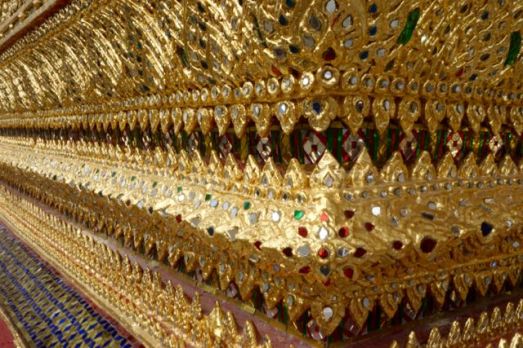 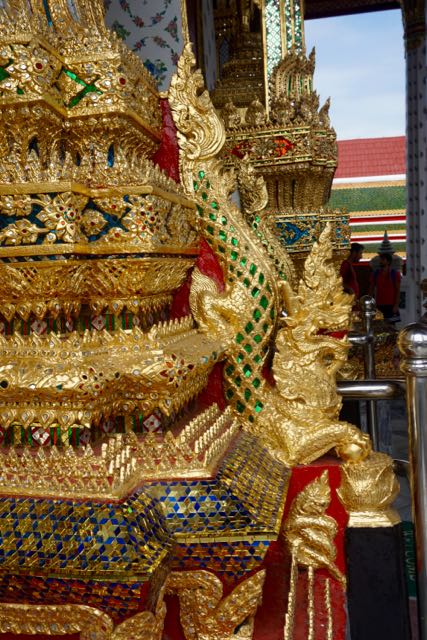 The detail on the structures at Wat Pho. 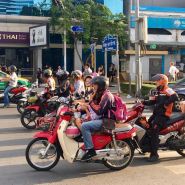 Bangkok street scenes including Lumpini Park, a 140 acre park in the city center, and a street in the Silom neighborhood, an area considered to be the main gay area in the city. In Lumpini Park at 6:00pm a song began playing over the loudspeakers. Walkers and joggers stopped to stand at attention and people who were seated stood. The song was another moment to honor the late King. After the song ended, activities resumed. 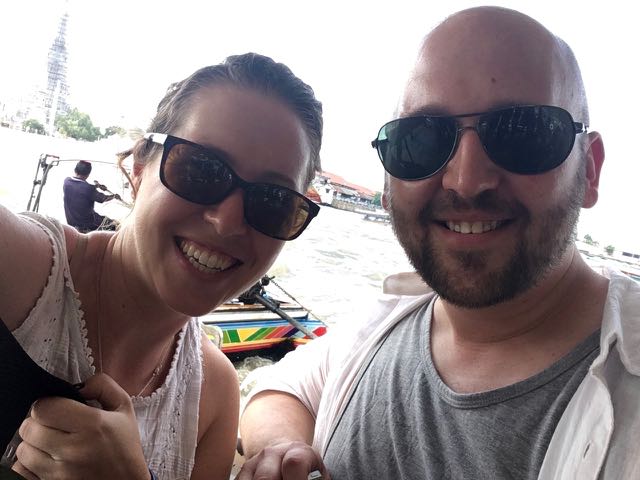 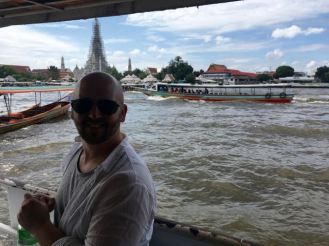 Justin and I joined a tour for a trip to the Damnoen Saduak Floating Markets outside of Bangkok city. I found the experience fascinating and funny! I paid money to go on the tour. Then, I paid more money to ride a boat. The benefit to me after these expenses: becoming a captive audience for souvenir sellers! I was amused the whole time. 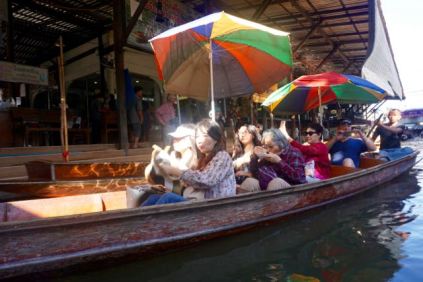 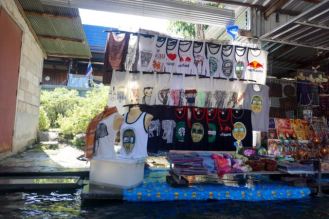 There were many boats filled with tourists at the market. We also saw market stalls and food sellers on the canal banks and at markets beside the river. 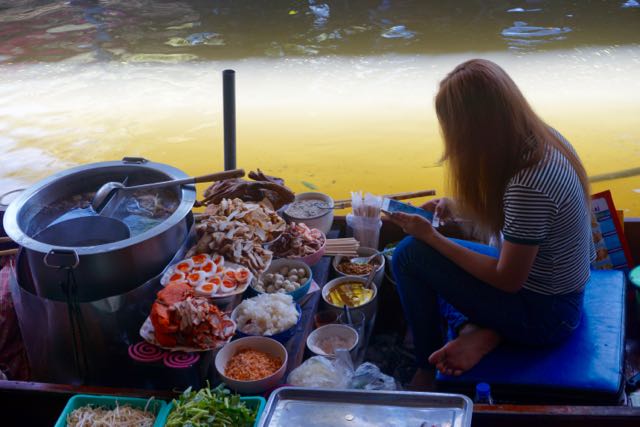 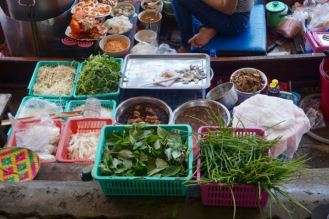 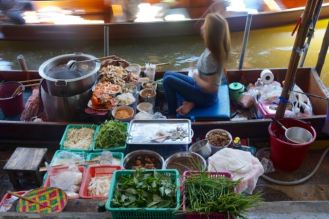 After visiting the market we took a second boat ride through the community to see the homes built along the waterways. Justin said this community reminded him of wetland communities in the Gulf Coast region of the U.S. 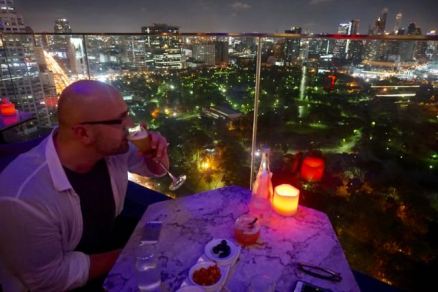 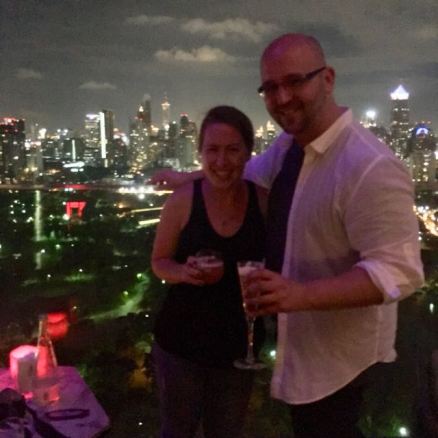 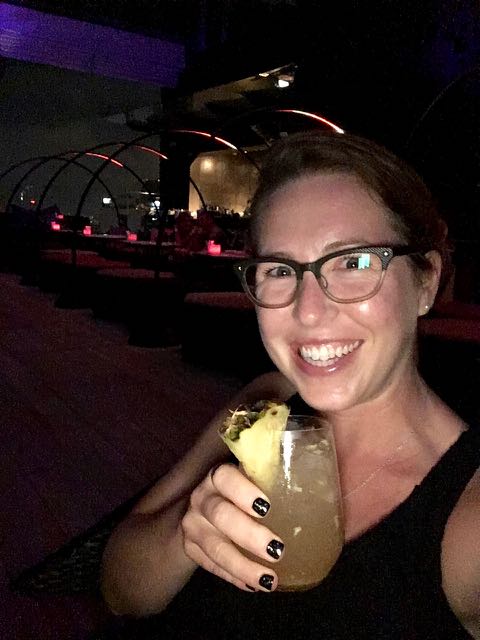 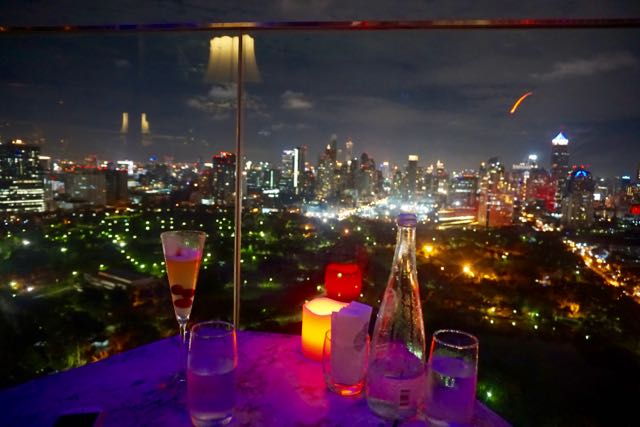 We celebrated friendship and a lot of good in our lives from this skybar overlooking Lumpini Park. The cocktails were tasty and the company was first rate. 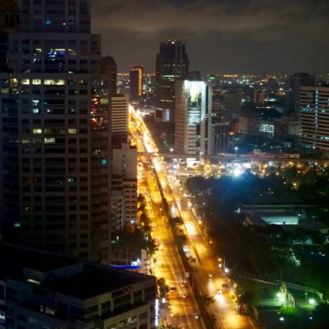 It was stunning to take in the Bangkok skyline and see the sprawl of this city. 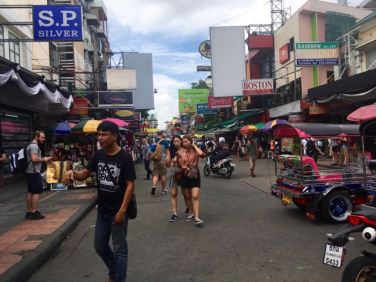 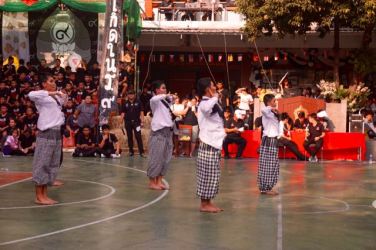 Street scenes from two popular neighborhoods in Bangkok – the backpacker zone called Khaosan Road and Chinatown. Most taxis in Bangkok are bright pink. We both liked this color choice. 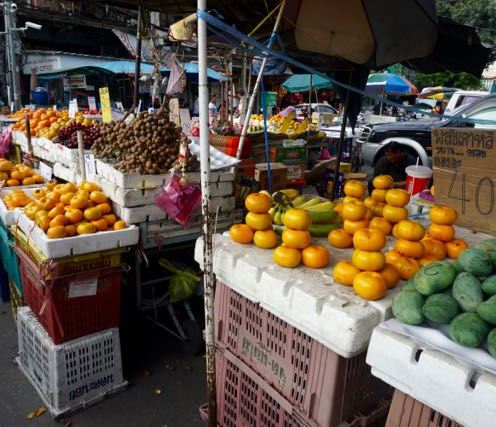 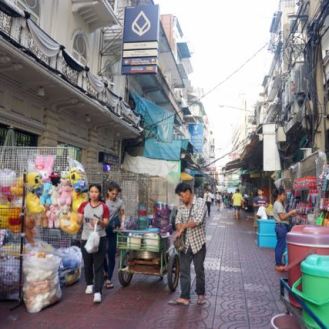 We visited Chinatown a week before to the Lunar New Year (also called the Chinese New Year). In preparation for the holiday, many decorations and sweet treats were for sale.