GDP per person in Myanmar in 2016 was estimated at $6,000 USD according to the CIA Factbook. The same source says approximately 26% of the country’s 51 million people live in poverty.

Given these statistics and what I was spending in other countries, I was surprised when hostels in Myanmar were more expensive than anywhere else I visited. Prior to arriving in Myanmar my least expensive dorm bed was $5 USD in Guilin, China and my most expensive dorm bed was $18 USD in Bangkok, Thailand. In Myanmar, staying in dorm rooms of the same or lower quality as in other countries cost a nightly average of $22 USD over 17 nights. The most expensive dorm room I stayed in was $31 a night in Bagan. While $22 dollars may be a weekly coffee budget for a person living in the U.S. and earning a middle class income, at 35% of my $60 USD per day budget, this expense was substantial.

As I read more about Myanmar and talked with other travelers I learned lodging in Myanmar is more expensive for two main reasons:

While slightly outdated, this article from the International Business Times titled Excited About Myanmar? Read This First highlights why people are excited to visit Myanmar, challenges for the country as tourism develops, and how tourism may impact human rights for the people of Myanmar. Even with the higher cost of lodging and the questionable beneficiaries of my dollars, I remain excited about my chance to have visited Myanmar. 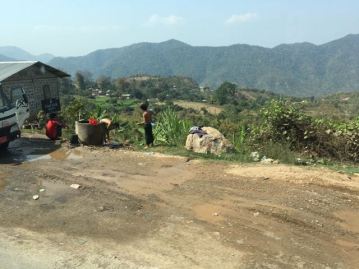 I took an 8 hour daytime bus ride from Nyaungshwe, the town closest to Inle Lake, to Bagan. From the window of the bus I spotted this elephant in transport.

My first day in Bagan I rented a bike and ventured solo around some of the 40 square miles of archeological ruins that make up the historical Bagan plains area. Everywhere I looked across the flat land it was possible to see temples and pagodas of various sizes. 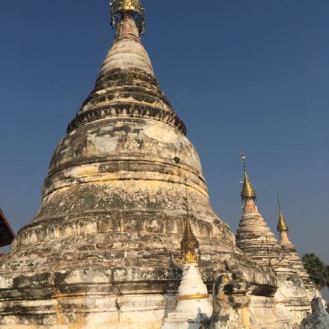 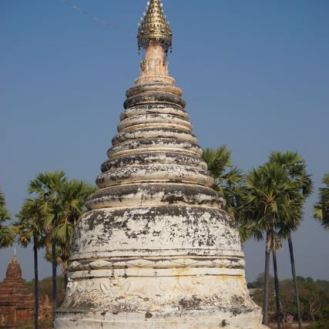 I stopped at the Ananda Temple which was built in 1105 and fully reconstructed after a 1975 earthquake rocked this region. This sight is one of the more revered temples in Bagan. 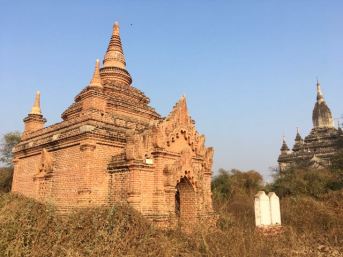 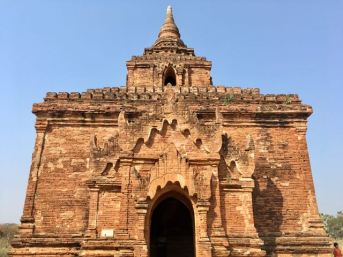 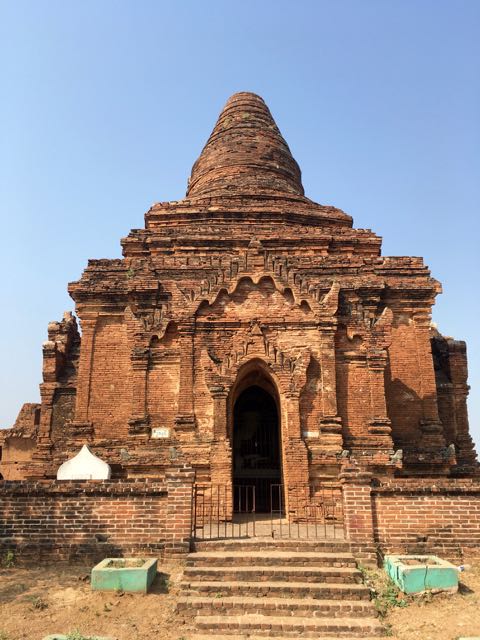 There are two main roads in the Bagan Archeological Zone. I biked about 5 miles on one of the roads, Anawratha Road, from New Bagan towards Old Bagan. I biked from 8:00am – 11:00am and the temperature was above 80 degrees. To respect the religious nature of the temples I biked with my shoulders and knees covered. These are a few of the temples I visited along the bike ride. 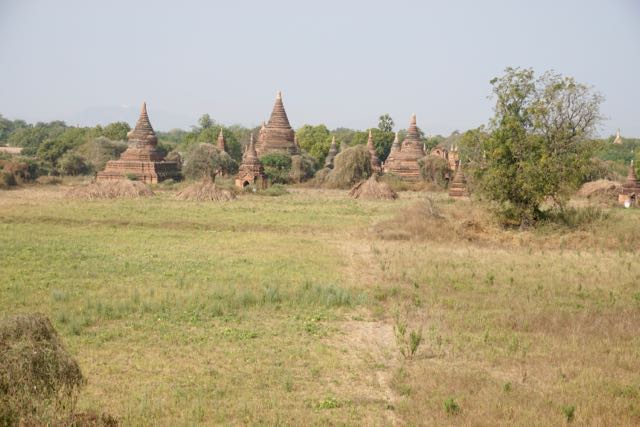 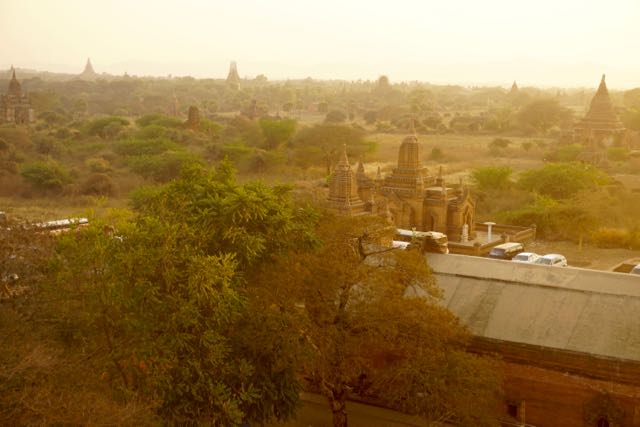 Bagan is famous for views of the plains with pagodas and temples dotting the landscape. Research indicates 2229 temples and pagodas remain standing after various earthquakes, transitions in ruling governments, and the impact of people (source). 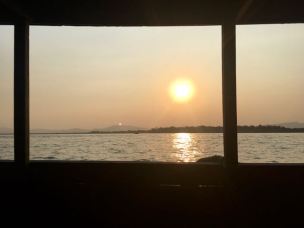 At the end of my first day in the city I joined a sunset cruise organized by the hostel. I observed more sunrises and sunsets in this country than anywhere else I have traveled. 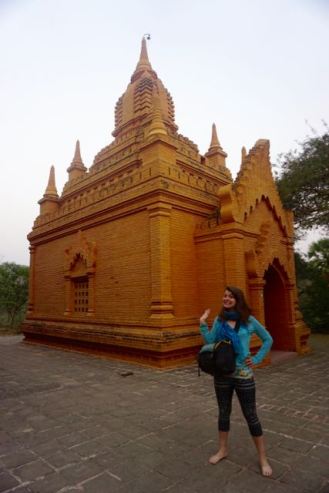 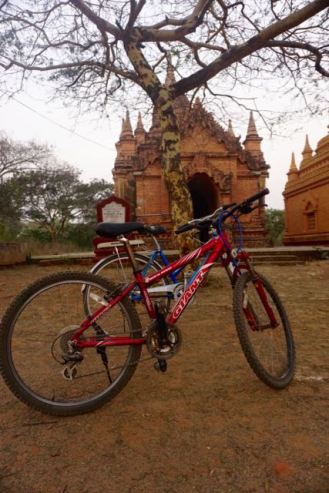 On my second day in Bagan, when I left my hostel before sunrise, I ran into Rachel at the bike rental stand. Rachel is a friend of Anna, who I met trekking in Hsipaw, and Rachel also hails from Minneapolis. We biked together for sunrise and sunset touring. Mid-day touring is prohibitive because of the temperatures. 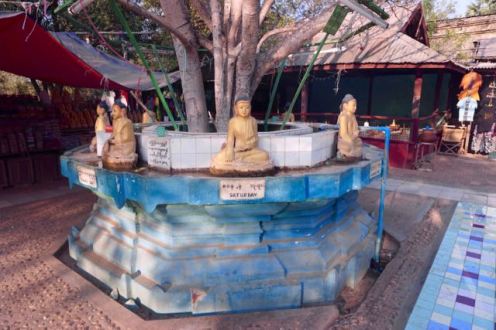 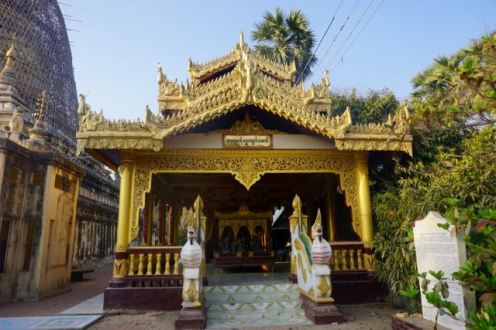 In the afternoon Rachel and I visited an active Buddhist temple in Bagan. Buddhist temples have an area with Buddha images each representing one of the days of the week. Most Buddhist people know on which day of the week they were born. As part of a prayer or request, observant Buddhists will pour water on the head of the Buddha representing their birth day. 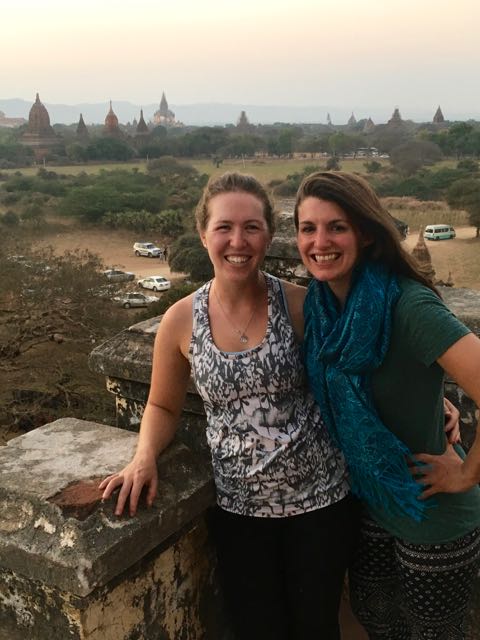 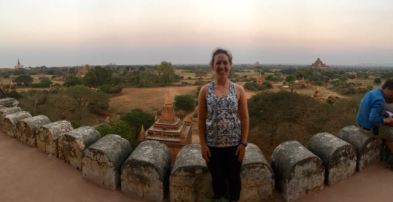 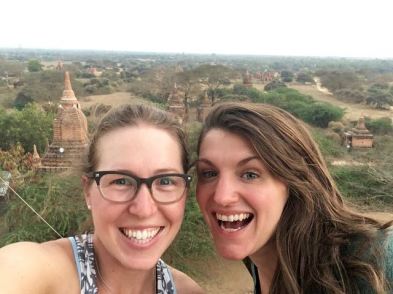 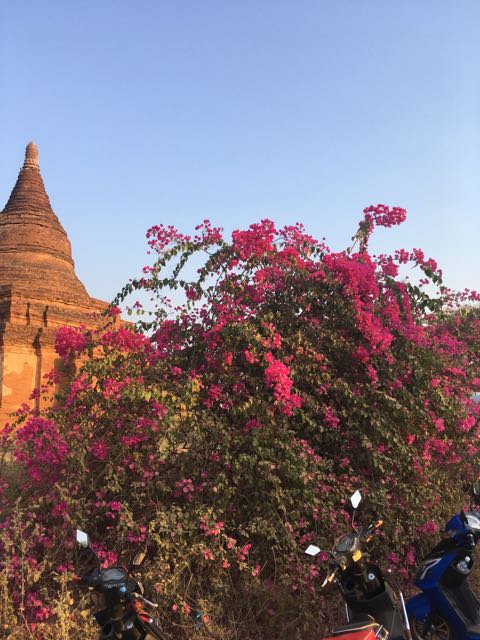 Rachel and I take in the landscape. Many visitors to Bagan choose to rent e-bikes, a mode of transport similar to a scooter, for a faster and less strenuous visit to the area. 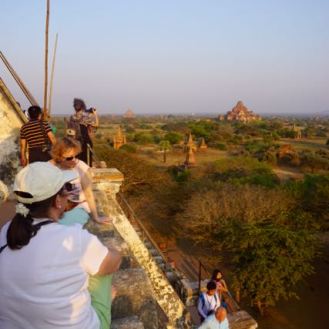 Watching sunrise and sunset from a temple is the main activity in Bagan. Only a small number of the 2000+ temples have staircases to viewing areas above ground level. Water cooler conversation with other travelers in Bagan involves discussing which temple to go to for the best views. Rachel and I watched a sunset from Buledi temple, a location that is also popular with tourist busses. I was amused by the large crowd of viewers whom I enthusiastically joined. 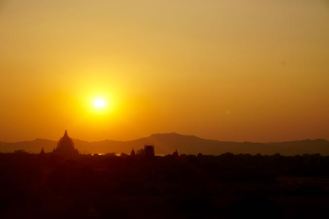 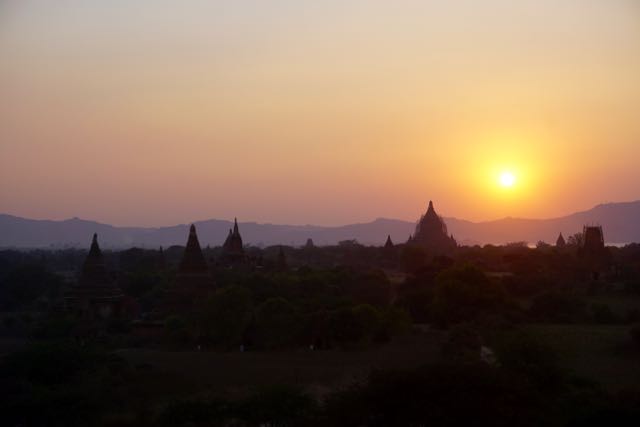 A sunset view of Bagan from Buledi temple. 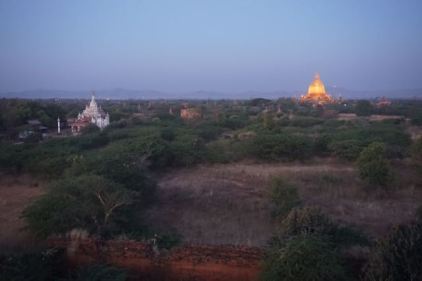 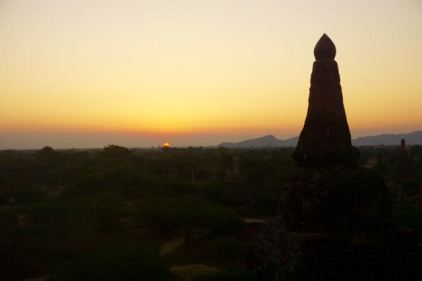 On my way to the airport for a flight to Ngapali Beach I stopped to watch one more sunrise. My taxi driver and I stopped at a temple the taxi driver selected. It was a lesser known temple so the crowd was smaller – only about 50 people.

For travelers with more disposable income, the opportunity for a hot air ballon ride over the temples immediately after sunrise is popular. Seeing the balloons float whimsically across the plains was exciting and saved me more than $300USD.